A raccoon, a beaver, a marmot and a turtle were planning a race.  The other three could not resist making fun of the turtle, because turtles are slow.

The beaver whispered in the marmot’s ear, “I bet we will cross the finish line before the turtle even gets going.”

The raccoon graciously suggested that the turtle be given a break. “Since we are so much faster, why don’t we play by the rules but let the turtle use all the tricks in the book and break all the rules.”

“Good idea,” said the beaver.  “Maybe the turtle will wave a magic wand and turn the daylight into total darkness.  Then we will be lost and we won’t see where we are going but the turtle will use special goggles that will let him see in the Dark.”

“It is a deal then,” said the raccoon, “let’s all meet here for the race tomorrow at noon.”

The turtle knew they were making fun of him and he walked away slowly,very slowly,back to his log in the Pond.

The turtle felt humiliated and he was a bit worried and Sad.  Why did he let them play a trick on him by agreeing to take part in the race?

A duck swam by and noticed that the turtle was not his usual self.

“Tell me about all that is bothering you,” said the duck.

The turtle reluctantly told the duck all about the race tomorrow.

The duck said, “Give me a minute or two to digest this all.”

With the turtle on her back, the duck tried to take off.  Both the duck and the turtle thought it would be a lot of fun, but the take-off turned out to be a total disaster.

The duck said, “I am afraid you are much too heavy.  The best thing you can do is tell your friends the race is off.” 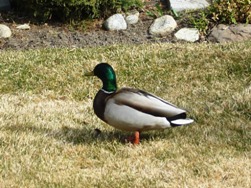 The turtle hated to admit it, but reluctantly agreed.  At that moment, swishing by came a big shadow.  Looking up, they noticed the shadow belonged to a blue heron.

Both said, “do you think what I am thinking?” and both nodded.  They quickly paddled over to the blue heron.  After learning of the turtle’s predicament, the blue heron offered to help.

Tomorrow came and all were anxious to get going at high noon.  The beaver, the raccoon and the marmot did not say much, but they were gleefully thinking:  No trick in the whole world will help the turtle win this race.

But they wanted to be kind and said, “don’t worry, turtle, winning isn’t everything.”

When the other three finally got to the finish line, they all had red faces.

They were embarrassed to learn that they had been outsmarted.  And the turtle, rather smugly, told everyone who would listen how he had won the race.